Home > Who We Are > Our People > Umar Farouk Sesay

“This is what a feminist looks like.”
– Barack Obama 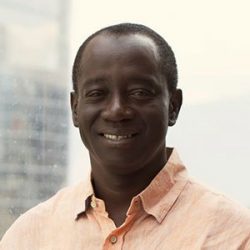 A feminist and Former Chairman of Board of Directors of the National Youth Commission, Umar Farouk Sesay is a published poet, international writer and a playwright. He published his first volume of poems, Salute to the Remains of a Peasant in 2007 in America. His work has also been published in many anthologies of Sierra Leonean poets, including Lice in the Lion’s Mane, Songs That Pour the Heart and Kalashnikov in the Sun.

He was resident playwright of Bai Bureh Theatre in the ’80s and some of his renowned titles include Tragedy of a Nation and The Great Rape. Within the period of 2009 to 2015, he was Visiting Fellow at the Centre for West African Studies in the University of Birmingham and Baptist University, Hong Kong.

In 2011, he was appointed by the former president of Sierra Leone as the Board Chairman of the National Youth Commission and he served in this position for seven years.