Home > Who We Are > Our People > Nicky Spencer Coker

“Feminist politics aims to end domination to free us to be who we are — to live lives where we love justice, where we can live in peace. Feminism is for everybody.”
– Bell Hooks 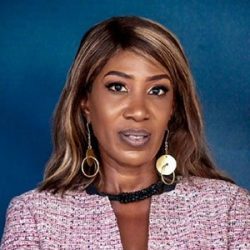 Nicky Spencer-Coker is a practising barrister and solicitor of the High Court of Sierra Leone. She was previously a State Counsel at the Ministry of Justice and Senior Defense Counsel at the Sierra Leone Legal Aid Board and serves as General Secretary of the General Legal Council , the authority responsible for the regulation of the legal profession in Sierra Leone.

As former President of Power Women 232- a network of women professionals and entrepreneurs and Vice-President for L.A.W.Y.E.R.S, the female lawyers organisation, she’s an inspirational advocate for the empowerment of women and girls and always willing to serve in their interests.

Additionally, Nicky is the Saturday Breakfast Show presenter on Capital Radio SL and is a much sought after compere. In 2007, she excelled as the Moderator for the Vice-Presidential Candidates Debate during Sierra Leone’s General Elections and most recently she was the Legal Analyst for the Womens Situation Room during Sierra Leone’s 2018 Elections.