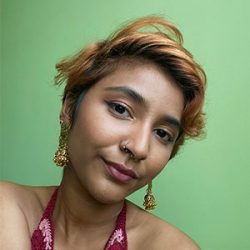 She identifies as an intersectional feminist and strongly believes in the need for gender mainstreaming in governance, and is passionate about contributing towards the strengthening of feminist movements. She is currently an advisor for the Asia Pacific Committee of FRIDA Fund and was part of the Strategic Planning & Design team for With & For Girls. Nationally, she is also part of the Campaign team of 111initiative powered by Undi18 that advocates for increased women’s political participation in Malaysia.