Home > Who We Are > Our People > Mary Lusenie 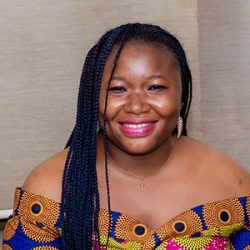 Coming from a small village in the Eastern part of Sierra Leone, Mary Lusenie was brought up by a small family with little or no formal educational background. Living by her life slogan, ‘You Never You Never Know’, she was always determined to be educated because she believed that was the only way she could improve herself and her family.

In 2014, she gained admission at Njala university, and graduated with a first-class degree in Business and Information Technology in 2014.

After graduation, she worked for one year as a paid intern in an ICT consultancy called Insight Technologies. Due to her sound understanding on data related issues, and her ability to understand the user requirements of their clients, she was appointed as a data/system analyst in this ICT Consultancy. In 2016, she gained formal employment at Guaranty Trust Bank SL Ltd, as an assistant database administrator.

In 2017, she got a scholarship offer to do her master’s degree in Information and Communication Technology at Huazhong University of science and technology, Wuhan, China.

In her quest to improve in her career, she joined Directorate of Science, Technology and Innovation (DSTI) in August 2019 as data science intern for six months. Due to her outstanding performance, she was hired as a Junior data scientist. She also lectures at Limkokwing University of Creative Technology in Sierra Leone.

Mary believes deeply in the importance of education and equality for girls, which has led her to Purposeful. She took up a role as a Data Insight Manager at Purposeful to put her data science skills into practice in order to understand more about girls’ realities and to support and promote informed decision making about girls’ power.