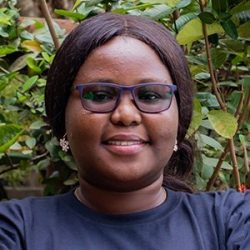 Fellow – With And For Girls Fund

Jugu is a warrior and a symbol of power. She grew up in an environment where the idea of marriage or childbirth was so common for young girls, but she chose to make a stand to break the norm. She acquired her Bachelor Degree in Public Health at Njala University, thereby setting a bar for the girls in her family to get a higher education and not get pregnant while in school. Jugu is passionate about mental health and loves working with children and teenagers especially girls, because she realised at an early age what it means for a woman to be educated and independent, noticing the way her mum held her head high and the respect that was accorded to her because she was a single mother and a breadwinner.

Previously, she worked as an intern at the District Health Management Team, Bo City. Jugu enjoys expressing her emotions in songs and writings. She is a flexible team player and active listener.