Home > Who We Are > Our People > Josephine Kamara

“Power is not given to you. You have to take it.”
– Beyoncé Knowles 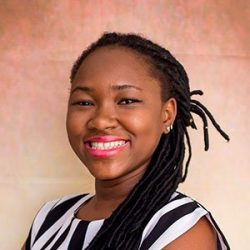 Josephine is a girl advocate, environmental activist and young communications professional. She was globally recognised by Together for Girls in 2015 as one of the 16 global heroes fighting to end violence against girls and is a fellow of President Obama’s Young African Leaders Initiative (YALI). Her brainchild, Women of Wonders SL, is a social and development club facilitating the rehabilitation process of girls who are orphaned by the Ebola pandemic and occurrence of natural disasters in Sierra Leone via facilitating educational support. Josephine was the national representative to the Philippines for the 2016 Miss Earth Environment Awareness pageant, representing Sierra Leone.