Home > Who We Are > Our People > Chernor Bah

“Another world is possible, she is on her way. On a quiet day, I can hear her breathing.”
– Arundhati Roy 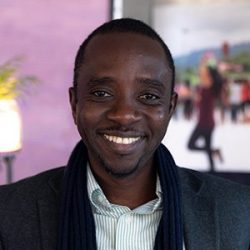 Chernor is a feminist activist who has dedicated his life to building the power and amplifying the voices of girls and young people across the globe and in his beloved Sierra Leone.

At the age of just 15, Chernor founded and led the Children’s Forum Network, a mass movement of children who organised and mobilised to demand their voices be included in peace and reconciliation efforts after Sierra Leone’s brutal civil war. Decades later, a new generation of Children’s Forum Network members still gather across the country every week, a testament to the power of youth voices and an enduring reminder of what mass civic mobilisation can achieve.

Chernor went on to lead initiatives for UNFPA (New York and Liberia), Nike Foundation (Ethiopia and Portland), CRS (the Philippines) and recently at the Population Council (New York). In 2012, Bah co-founded, alongside Gordon Brown (former British Prime Minister), A World at School – a global mobilisation and campaign organisation for global education.

Chernor has twice been appointed by the United Nations Secretary General to high level steering committees, and is an Expert Advisor to the Security Council on Youth Peace and Security. In 2018, he was appointed by the UNICEF Executive Director to the International Task Force on Workplace Gender Discrimination and Harassment.

Chernor has spoken at the White House under President Obama, introduced the First Lady at the UN General Assembly, spoken at the European Union, African Union and the World Bank, and lectured at universities around the world.

When Ebola struck Sierra Leone, Chernor returned home and began to organise and mobilise once again. From crisis comes opportunity, and so Purposeful was born, rooted in the most profound belief that not only are adolescent girls powerful, but if we can support her to live in that power, she will lead us all to liberation.