“Freeing yourself was one thing, claiming ownership of that freed self was another”
– Toni Morrison 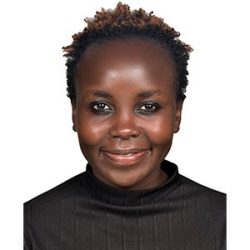 Chepkwemoi Kimtai or as she likes to be called, Kwem, is a storyteller and feminist thinker interested in narrative building and framing as a pathway towards liberation from the patriarchal, heteronormative and capitalistic systems of oppression within which we live in. She seeks to make observations, examine, question and hold accountable power dynamics that determine and drive equality, diversity and inclusion. As an African Queer feminist, she is grounded by the Charter of Feminist Principles by African Feminists. She also believes in making space for mindfulness, body movement, rest, play and somatic practices as healing components necessary in social and gender justice work.

With a Bachelor’s Degree in Theatre Arts and Film Technology, Kwem is a communications specialist and and previously worked at UHAI-The East African Sexual and Health Rights Initiative, an activist fund resourcing Sexual and Gender Minorities and Sex Worker Movements in Eastern Africa.

She is also a Young African Leadership Initiative- YALI fellow; a 2017 cohort member of Ashoka East Africa Emerging Innovators and currently serves as an advisory group member of CIVICUS: The Diversity & Inclusion Group for Networking and Action (DIGNA)

Hosted by Purposeful and convened by the African Federation for Sexual Health and Rights.

The 10th Africa Conference on Sexual Health and Rights

Find out more and Book