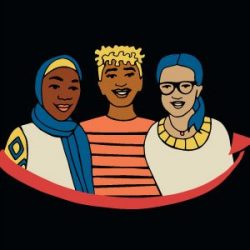 Carolina is a Brazilian woman, feminist, young and bisexual activist, based in Rio de Janeiro, Brazil. She’s 28 and started her activism at 16. Now she works with Women’s and Youth’s rights. She’s been working with feminism, feminist / equality projects and methodologies since then and she’s also part of youth groups. She’s the political & programmatic articulator of Feminicidade, an urban feminist group, that uses urban visual interventions to speak about VAW, and she also integrates Articulação de Mulheres Brasileiras, a feminist anti-racist and anti-systemic national articulation in Brazil. She also part of Finadas do Aborto, a performance feminist group that speaks about reproductive and sexual rights.

Carolina believes that the revolution comes from women, especially those ones from the outskirts and favelas of the world.