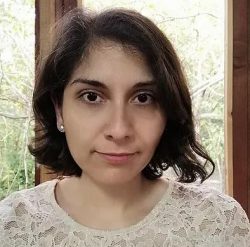 Abril Violeta is a bisexual gender fluid and non conforming ecofeminist. They are a communicologist specialising in Gender Studies in Education, and diagnosed with borderline personality disorder and generalised anxiety. Abril Violeta is a co-founder of Mexicali Resiste y Las Borders, and a co-founder and current coordinator at Bifanzine Colectivo. The foci of their activism are the visibility of the bisexual population, the co-creation of secure spaces for meetings and dialogues between LGBTIAPQN+ people, feminist support for safe abortion and the recovery of ancestral care to bodies and territory.